In a time of talks on global warming and high carbon pollution rates, when countries are discussing alternative sources of energy, sanctions, and ways of reducing the pollution in our world, a great innovation emerges from Zimbabwe with the hope of acceptance as a solution to save our world.

Somewhere in Zimbabwe, Kuwadzana to be precise hails Sangulani Maxwell Chikumbutso an entrepreneur and engineer age 38 with an interesting and controversial technology that could save our world.

Sangulani is the CEO of Saith Technology which is known to have manufactured unbelievable green energy technology since 2003. His very first invention was a radio broadcast transmitter in the year 1997.  As reported on SABC news video online, he has invented an incredible technology that emits zero carbon, his latest invention, the First Radio Frequency powered car in the world. Sangulani said it himself at the launch of his invention, that his car ‘is the first electric vehicle in the world that drives without the need of recharging systems’- no fuel, only clean energy. The report also said that he faces challenges as his innovation has been rejected for patenting. 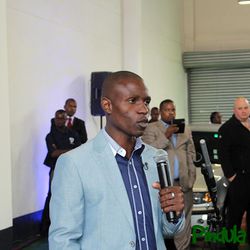 In 2009, he spoke with some prominent professors in Zimbabwe on the idea of inventing a self-powered generator using his technology, the professor said it was impossible. Nevertheless, he went ahead and created his first prototype of the Greener generator which generated 1,200 Watts of energy.

The reason given by the patent examiners hang on one fact, that his invention ‘defy’ present-day laws of physics. They rather proposed to categorize it as a perpetual motion machine. In my opinion, I will say they should make the laws on patent flexible because a lot of things has changed and yet the education system has not.

According to Wikipedia, a perpetual motion machine is a hypothetical machine that can work indefinitely without an energy source. This kind of machine is impossible as it would violate the first and second law of thermodynamics.

The United State Patent and Trademark (USPTO) has made an official policy of refusing to grant the patent to perpetual motion machines without a working model, and here Sangulani has a working model. According to the Patent Office, manual of patent practice, June 2006 online version (para 4.05), ibid, (para 14.79), perpetual motion machines are patented if they have ‘industrial’ application or are ‘useful’. In Sangulani’s case they are more than useful, but was still turned done at the UK Patent office. In Zimbabwe and South Africa, they also failed to patent his invention.

According to a Journal of Intellectual property Law & Practice, Vol 2, Issue 3, 1 January 2007 pages 136-144 published on 06 February 2007 online, it states that scientifically, perpetual motion machines are impossible, but that does not limit a steady stream of applications that attempts to patent them.

Inventors gain the right to control how their discoveries are used through patent in exchange for telling the public  how they work. This offer, drives modern economies and lead to advancement in knowledge. In addition, patents are required to protect inventors from having their innovations stolen by powerful competitors.

Speaking of competitors, Sangulani has turned down the offers of buyouts from  unnamed  European based companies. Furthermore, he got an investment support from Teddy De Almeida who he also invited on the Launch of his products and made a shareholder in his enterprise.

In conclusion, it is obvious that a new generation of African youths are bent on changing the status quo in the bid to capitalize on the abilities available in their different countries. These young and vibrant youths should be encouraged  by supporting their ideas no matter how different it is to ‘old technologies’ or ‘systems’.  Furthermore, what is important is that a said ‘technology or innovation’ has been tested and works perfectly to solve a solution.